skip to main | skip to sidebar

I hope that all of my 3 readers have a Happy and Healthy New Year.

Kudos to those that can translate this Morse Code message into English.


"The voyage of discovery is not in seeking new landscapes but in having new eyes." - Marcel Proust
Posted by Libby at 6:59 AM 1 comment:

OCLC has updated its list of the top 1000 titles owned by libraris. WARNING-This list can be quite addictive. I am shocked and appalled of all of the titles that I have not read. Also, check out their list of related factoids.


Well, it's finally happened. There is now Elvis coffee. You can even get a monthly coffee subscription. 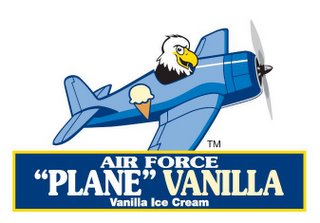 There's just something about this image that I find very amusing. It's just not something that I would expect to find on a carton of ice cream. This image adorns Air Force "Plane" Vanilla. Check out the rest of the Star Spangled Ice Creams.

Now most of the yogurt I've eaten has been made from cow's milk. This yogurt is made from water buffalo milk. Mmmmm!!!! I am going to have to try this. I'm a big baby about yogurt. I can't have yogurt that has any fruit bits, etc. It has to be blended smooth. This also has the good-for-you Omega 3 added. I just checked and it's not at any retailers in the WDC, Maryland or Virginia so it looks like it will be awhile before I can check it out.

Over the holiday I had the chance to eat some of the Archer Farms snacks that Target carries. OH MY GOODNESS!!! These are insane. One of the snacks that we tried was the Archer Farms Southwest Snack. The packaging is different; I like the current packaging much better and the snack itself was amazing. We also tried the Chocolate Drizzle snack and one other one that escapes me. I'll be headed back to Target this weekend to get some more.

I want to start this entry by saying congratulations to Randal Pinkett for winning the Apprentice position. I don't watch this show because for one reason I'm not a huge fan of reality television and I also don't care for Donald Trump. The only reality television A. watches is The Apprentice so I usually here whats going on from him. So kudos to the first black Apprentice. This guy has 5 academic degrees and is a Rhodes scholar. Big brains or what.

Also I am so proud of Morgan Freeman for finally saying what I have been saying for years. Get rid of these ridiculous "history months".

And on a purely frivolous note- In my next life when I come back looking like Dita Von Teese (of course I wouldn't be hitched to Marilyn Manson) and have all of the money in the world I am buying every single thing here.

Now to the round up.

Bathsheba Grossman is a mathmetician and an artist. Check out her amazing metal sculptures. They are like 3 dimensional mandalas. I would love to carry the vorocube around in my pocket as some sort of talisman. Very cool. And I love her name.

Oh how I wish Zubbles had been around when I was a kid. I used to love to sit on one of my swings or even better, the top of the sliding board and blow bubbles. These colorful bubbles are great. It took the inventor 10 years to come up with this science.

I'm not sending Christmas cards this year, but if I were I think I would have to send some of these cute cards from Bella Muse. Or these from Portion.
Cards That Give is a source for charity greeting cards.

Finally for more year-end lists than you can shake a stick at check out Fimoculous.

"Excellent day for putting slinkies on an escalator" Anon
Posted by Libby at 4:03 AM No comments:

This is the first time I have viewed the Panda Cam and Tai Shan (Peaceful Mountain) wasn't napping. He was chowing down on some nice bamboo. This was at 7:00 a.m. this morning.
Posted by Libby at 4:00 AM No comments:

I remember this like it was yesterday. I was an undergrad and a couple of my girlfriends and myself were in a car going somewhere. The BeeGees song "More Than a Woman" came on the radio. Of course we were all singing and I noticed that Lucy was singing her heart out, but she was singing a whole different lyric than the rest of us. Lucy had thought until that very day that Maurice, Barry and Robin were singing "Bald-Headed Woman". Uh-huh!!! I have since learned that misheard lyrics are called mondegreens. Here are some Christmas mondegreens.

Everyone has a blog. Including that jolly old elf Santa. I always thought he and Mrs. Claus would have the coolest and best technology.

And speaking of Mr. and Mrs. Claus-You know those wonderful herd of flying reindeer they have. Well they are female. Yep. Male deer shed their antlers in November and December and if you recall Dasher, Dancer, Prancer, Vixen, Comet, Cupid, Donner and Blitzen all have their antlers on for their longest ride. Females don't shed their antlers until the summer. You go girls.

Now I don't consider myself very creative, but I think I have come up with some good ideas. I thought of liposuction when I was a kid. Of course I was thinking that a vacuum cleaner hose could be used, and, well you get the picture. One other idea that I have actually put into practice is adding scent to paint. I think that I probably didn't use enough or perhaps my oils weren't concentrated enough because the scent didn't last long. I wonder if Anna Sova's aromatherapy additives will last?

I have always loved flash cards. I think that if you educated make education fun the educatee will tend to remember the eductaion. Catch my drift. These Flash of Brillance flash cards are very cool.

I wasn't going to get into this, but I'm ticked off about so why not. I have spoken before about the fact that I do not understand why people feel the need to come up to me and say rude things about me to me. I ended up running into someone that I use to work with about 10 or so years ago. Now I was in a store minding my own business and I heard my name. Now usually my first response is to flee-run like hell-haul ass. I have been known to duck down in a clothing store and hide, to knock over things trying to get away from people. Silly, ridiculous-yes. Can I stop myself? Only if trapped. This time I was trapped.

We chatted and one of the first things she tells me is you really look good in your face, but you've picked up a bit of weight. First of all does she think that I don't know that I am haven't gained weight? Does she think that having her hurt my feelings by pointing this out that I'm going to run out and join Weight Watchers? I will never, never understand this. I would never dream of telling her, your still built like a brick shithouse, but your mug looks like 25 miles of bad road. Maybe you should of stayed out of that sun. Or you know you are 10 years younger than me and your neck looks like reused crepe paper? Did I say anything like that? Of course not. Yes, maybe I'm terrible for even thinking those things, but I would never say them. Never, ever.

Okay, I am done. I swear I some days I just want to go on the highest hill, pull down my pants and just moon the hell out of everyone while screaming to everyone PISS UP A ROPE!!!!!!


"When I had youth I had no money; now I have the money I have no time; and when I get the time, if I ever do, I shall have no health to enjoy life. I suppose it’s the discipline I need; but it’s rather hard to love the things I do, and see them go by because duty chains me to my galley. If I ever come into port with all sails set, that will be my reward perhaps." - Louisa May Alcott
Posted by Libby at 5:35 AM No comments:

If I Were a Kid

If I were a kid I think I would definitely have to ask Santa to load his sleigh with these items for me: This adorable Sky King Tricycle has a working headlight for pete's sake. And it's red. Too cute. It's available from Restoration Hardware.

The Norton Anthology of Children's Literature .

If I were an older kid I think this would help me study for the PSAT and SAT. Do they still give the PSAT?

Okay that's enough. I don't want Santa to think I'm greedy or to weigh down the sleigh to much for the reindeer. The anthology alone is 2,4171 pages.
Posted by Libby at 7:44 AM 1 comment:

Found these incredible treehouses that all of the parents out there can get for their kids. I should say all of the wealthy parents.

We played lots of board games when I was growing up and I still like board games and puzzles. I actually preferred Scrabble and card games, but I could also enjoy a game of Monopoly. For those of you that might need some more or extra Monopoly money Hasbro has provided an easy way to obtain some.

I was perusing the latest issue of the Garnet Hill catalog and found these adorable blocks. I wish they would of made cool blocks like these when I was a kid. Of course I still think Lincoln Logs are great.

Since I am a child-free and am seldom around kids I don't know if kids use or like chalkboards anymore. This adorable magnetic cow chalkboard is just too cute. They also have a dog and a cat.
Posted by Libby at 11:40 AM No comments:

I think this falls under the heading of who knew and also very cool.

I think just about everyone is familiar with Flickr the photo sharing site. Check out some of the different subject groupings. I think one of my favorites is the Squared Circle Group. What is this? It's photographs of circular things inside a square frame. I also like the Moleskinerie group. These are photographs of all of the different things people have done with their Moleskin notebooks.

For years these Belted Galloways have been my favorite breed of cow. I've said before how their Oreo cookie looks just tickles me.

I still like the Belteds, but check out these Ankole Watusi.

Impressive rackage or what!!! I just can't imagine toting something like that around on my head. I guess I could never be a Las Vegas showgirl then.

Have a great weekend.
Posted by Libby at 4:27 AM No comments: